If I would tell you that there\’s a way to improve your health, help the environment, save money and even feel great about it, all while doing something you already do every day, what would you think? There\’s a method to shave, a method your grandpa probably used. This method is around for over a century and it\’s catching on more and more buzz. It\’s not something new, but it looks like it\’s being rediscovered. I\’m talking about safety razor wet shaving. In this section I\’m not only going to talk about how to find the best safety razor, but I\’m going to tell you the benefits which come with shaving this way, so you have the information and can take the best decision.

You must specify a pricing table id.

What is a Safety Razor?

Safety razors first appeared at the end of the 19th century, in 1880 to be more specific. They were invented by Fredrik and Otto Kampfe, two guys from Brooklyn, NY. Their design included a single-edge (SE) blade that was attached to the handle at a right angle. The blade was protected by a comb that was put over it, hence the term safety in its name. The double-edged (DE) safety razor appeared some years later, in 1901. It was invented by King Camp Gillette. His design included a disposable double-edged razor, which took off in terms of popularity, since it became the standard razor of the United States Army in WWI.

These days safety razors have an air of vintage luxury and can be found in both designs: single-edged and double-edged. Technically speaking any disposable razor is a safety razor judged by design, but it\’s commonly accepted that people are referring to the type of razors presented in the chart above, when talking about safety razors.

What are the Benefits of Shaving with a Safety Razor?

The most important reason men rediscover the art of wet shaving is because of their skin. Although some of the better models of electric razors have anti irritation technology and can be used wet and dry, a majority of men don\’t have a lot of time available in the morning and only shave dry. Having a wet shave, at least from time to time, is a practice than will reinvigorate your skin. It\’s very important to keep your skin healthy and well hydrated. This is the basis of a great skin. Try using products of a high quality, because many shaving and skin care products are rich in chemicals that can dry out or harm your skin after consistent use.

It\’s way more cost efficient for the exclusive wet shaver to go for a safety razor than for multi-blade cartridge razors. Aside from the initial cost of acquisition, the replacement razors cost pennies. For instance, a replacement cartridge for a marketing driven cartridge razor can cost around 3 dollars a piece. The replacements for a traditional double edged razor costs around a quarter. This results into an attractive sum of  savings over a year.

This has a larger impact when seen on a large scale. The final result will be achieved one wet shaver at a time. When it comes to traditional wet shaving the only waste that you create is the lather that goes down the drain and a metal blade that is very easily recyclable. If you would like to further lower your footprint you might try using a straight razor that will leave absolutely no disposable waste.

Starting your day with a refreshing wet shave, using the best safety razor, will have a way bigger impact on your entire day than you might think. Shaving with an electric razor still remains my favorite method because of the many benefits. On the other hand, when I take a couple of minutes in the morning to go for a nice wet shaving ritual, I smell good, have a smooth face, am energized and overall step very optimistic into my day. 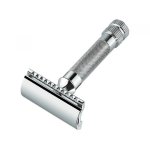 Using a safety razor is probably the best way to wet shave. You might think they’re basically all the same because they’re all made up of similar parts. In reality, though, there are some differences between them and not every safety razor is the best choice for everyone. One of the more appreciated companies that […] Read more 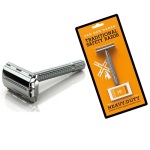 Shaving with a safety razor is the way to go if you want to experience a quality wet shave. Most wet shavers started out with disposable cartridge razors, but no matter how many blades the manufacturers add to their new releases, they’re never going to surpass the experience of shaving with a double edged safety razor […] Read more 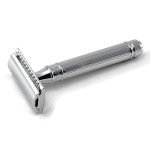 There is nothing better than a traditional shave. The old saying is if it isn’t broken, don’t fix it. And the traditional wet shave style is a lost art that requires good tools. The Edwin Jagger DE89Lbl Safety Razor is one of the better products in this category that above all has a very fair price for […] Read more 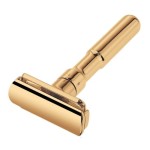 Merkur Adjustable Futur Gold Plated Safety Razor is one of the most desirable adjustable designer razors that most of us would like to bring into our bathrooms. This razor is crafted with glowing gold chrome plating making it look even more desirable and stylish. Most importantly, you are able to adjust the angle of the […] Read more 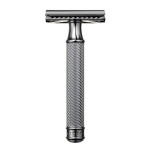 I always admired my grandfather shaving with a safety razor when I was a kid. But times changed, and as electric razors made everything quicker, easier and more comfortable, men around the world steered away from the traditional wet shave. Traditional wet shaving can be performed in two ways; either using a straight razor or […] Read more